Weapons to Use While Hunting Hogs in Texas

At Dos Plumas Hunting Ranch We often get asked.

What is the best weapon to use on a hog hunt in Texas?

We’re talking today about your two most important allies in hunting — your abilities and your weapons. You need to know how your weapon performs at certain distances … whether it’s a bow or a rifle.

Hog hunters using a rifle might think it doesn’t matter much if you use different grains of bullets when shooting at wild hogs. Shots can be fired and hogs missed if you don’t pay attention to this important piece of the hunting puzzle. So let’s go over a little bit of that …

In order to get the same performance out of a rifle, you have to shoot the same ammo, the same brand, the same grain. I just can’t tell you how important it is, especially at a great distance, how much difference it makes in the weapon’s ability to perform at its optimal level.

Bow hunting is the similar. Archery hunters seem to be a little bit more particular on everything being consistent. We’re always taught to have the same anchor point, grip the bow the same(lightly), hold it the same, look through bow sights the same, and everything on the bow needs to stay the consistent. I can’t tell you how many times the peep site may have slipped just a little bit and a shot is missed. One little change will cause that arrow to fly a lot differently. And archery hunting need to always shoot the same arrows. It’s very important to shoot the same brand, the same broad head, the same grain. I can’t tell you how important that is in order to harvest a wild hog here in Texas. It’s all about taking the hog quickly and cleanly. Nobody wants to put a poor shot on an animal. If we practice a certain way, we hunt the same way.

You see articles about this in different magazines. It may be the same topics but it’s worded just a little bit differently to try to get the point across of how important it is.

Next you need to know your abilities. A person really needs to stay within his abilities. If you have never tried a 300 yard shot and you’ve been successful at 200, don’t go past those abilities unless you’ve practiced at that distance. You owe it to the animal to take him as quickly and cleanly as possible. A bow hunter especially, will practice at 20, 30, 40 yards and a person needs to know what his abilities are and don’t go outside of those. It does not do anyone any good. I can’t tell you how frustrated I’ve seen people that have tried to stretch their abilities out, put a poor hit on an animal, and then they track it as far as they possibly can and then they lose the animal.

So know your abilities and your weapons. If you do, you’ll have a much greater chance of harvesting the Texas wild hog you are looking for. 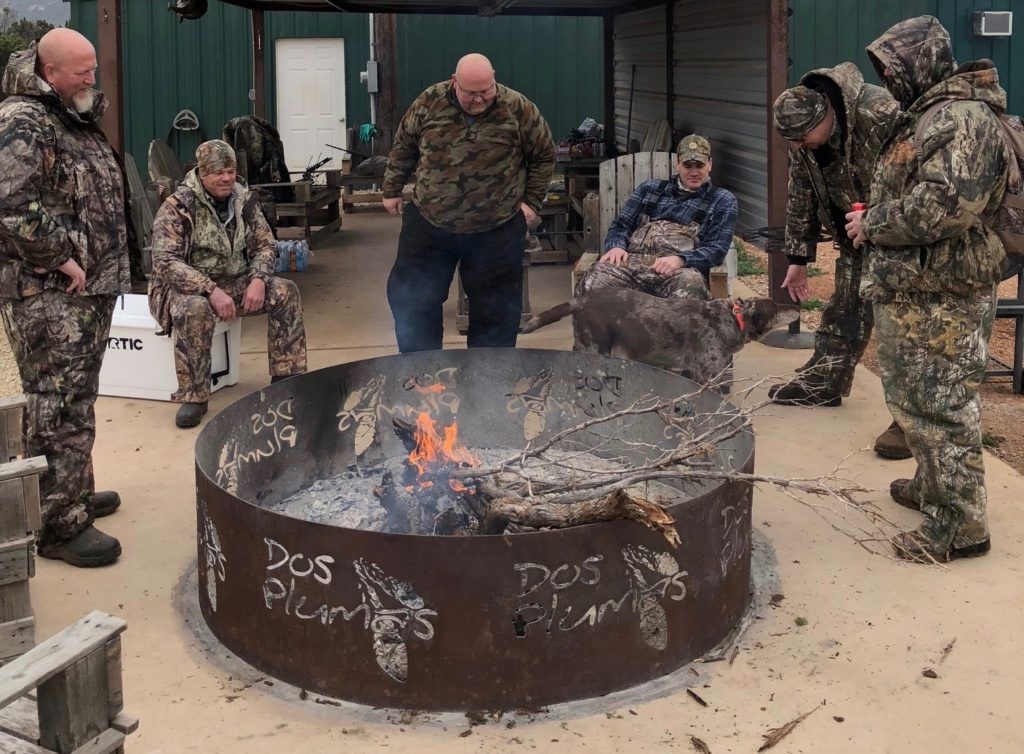 Relaxing After The Hunt

What Camo to Where on the Texas Hog Hunt

One of the biggest mistakes in hunting Texas hogs that I have found new hunters make is the art of camouflage. And it’s more than just going to some of the larger clothing or hunting stores and buying camouflage. Camouflage goes way past a shirt and a pair of pants.

I’ve gotten to the point where it’s almost comical because you’ll have a guy camouflage everything but their hands and their face. Their hands and their face are what move the most. If you’re sitting down in the tree stand, you look like an owl looking around. That white, shiny face is moving all around. Their hands are scratching their nose. They might rub their ear. But that hand is moving as well. And they just don’t even realize it.

I videoed something else just the other day. I had a gentleman in that I was guiding on an oryx hunt. He was camouflaged, no face mask, no hands, but I was able to teach him how to use the cover to work his way into position without being detected. As he’s laying there his sleeves move up and he’s got this beautiful silver shiny watch right there just shining like a diamond.

He couldn’t figure out why the animals ran away. And I told him, “Brother, you look like a beacon to them. When you’re in their world, you’ve got to do things a little bit different.”

Glare and shiny objects are very important things. You can have the shirt and the pants on but that doesn’t make you invisible.

Last and most important, be still. If you don’t have a face mask or gloves, you can be still. If you really think about it, movement is what gets our attention nine times out of ten. Rarely will a person be able to scan the area and pick out the tip of an ear, or a horn or a tail or a leg, just any body part of the animal, without that animal moving first. Movement is what catches our eye and that’s exactly what catches the eye of the animal. So if a person is still then they’ll be able to get away with not having as much camouflage on than if he was moving.

So camouflage the best you can. But if you don’t have mask and gloves, by all means don’t wear jewelry or sunglasses, and be as still as you possibly can. You’ll be surprised how much more you’ll see if you obey the camouflage rule.

How to Stalk Wild Hogs in Texas

Texas wild hogs aren’t really given much respect but in reality are a very intelligent animal. Hunting wild hogs can be a challenging hunt but also a very productive hunt if you know the signs to look for as well as techniques to outsmart the wild hogs.

What does a Texas wild hog track look like?

A wild hog track is similar to a whitetail deer track except that Texas wild hogs tracks are more rounded and wider.

Wild hogs leave behind a lot of evidence to indicate their presence, especially at Dos Plumas Hunting Ranch.   What are some examples of wild hog sign?

Wallow
A wallow is a muddy or wet area the wild hogs use to roll around and coat their skin with mud to protect themselves from bugs as well as cool off. Wild hogs have to stay cool during the hot Texas months, making night hog hunting a good option, and can often be found around watering holes. Wild hogs often leave behind hair and debris as they roll making it very obvious they have been in the area.

Rooting
Rooting is a very common hog sign. A wild hog can root the soil to make it look as though it has been plowed for planting. This is a primary reason most farmers in Texas do not like the wild hogs in their area.

Rubs
Rubs are left behind when a Texas wild hog scratches himself on a fence post, tree or pole and leave behind mud or hair as evidence that he has been there. The height of the rub is a perfect way to tell the size of the wild hogs in the area and give you a better idea of their most recent activity.

Wild Hog Game Trails
Looking for game trails or tracks is also a great way to search out the wild hogs your hunting. Game trails show wild hog activity and is a good place to start your scouting and set up a place to hunt.   Is the game trail covered in grasses? If so, they may not use the trail any longer. Is the trail well worn? If so, it’s very likely the wild hogs use this path regularly.

Scat or Wild Hog Droppings
This might seem a pretty obvious sign but many hunters, especially first time hunters might overlook this evidence of wild hogs in the area.

Hopefully, this information can help you to be better prepared to successful hunt the illusive Texas wild hog. Here at Dos Plumas Hunting Ranch you will find all this evidence on the ranch. Texas wild hog hunting is our specialty and we are known for having an exceptionally high success rate. Check us out online and if you have any questions about hunting wild hogs at the ranch give us a shout at 325-665-9450. Allen and Brice are avid hunters and especially enjoy talking about Texas hog hunting!